The global appetite for fast mobile data access and instantaneous access to rich content is insatiable. Even though operators are partial to overpromising and under-delivering with new technologies, there is still a huge amount of excitement surrounding 5G. But there are still some fundamental technology decisions to make, particularly in regards to performance, deployment and technologies used.

Now that the first 5G 3GPP standards have been formalised, the roadmap is beginning to reveal itself. We’ve learned, for one, that the very first mobile networks will be launched under the moniker of 5G won’t quite be the revolution that they’re being presented as. Some networks will launch with non-standalone technology (LTE-Advanced Pro), possibly based on 3GPP Release 15 Option 3 (see below). 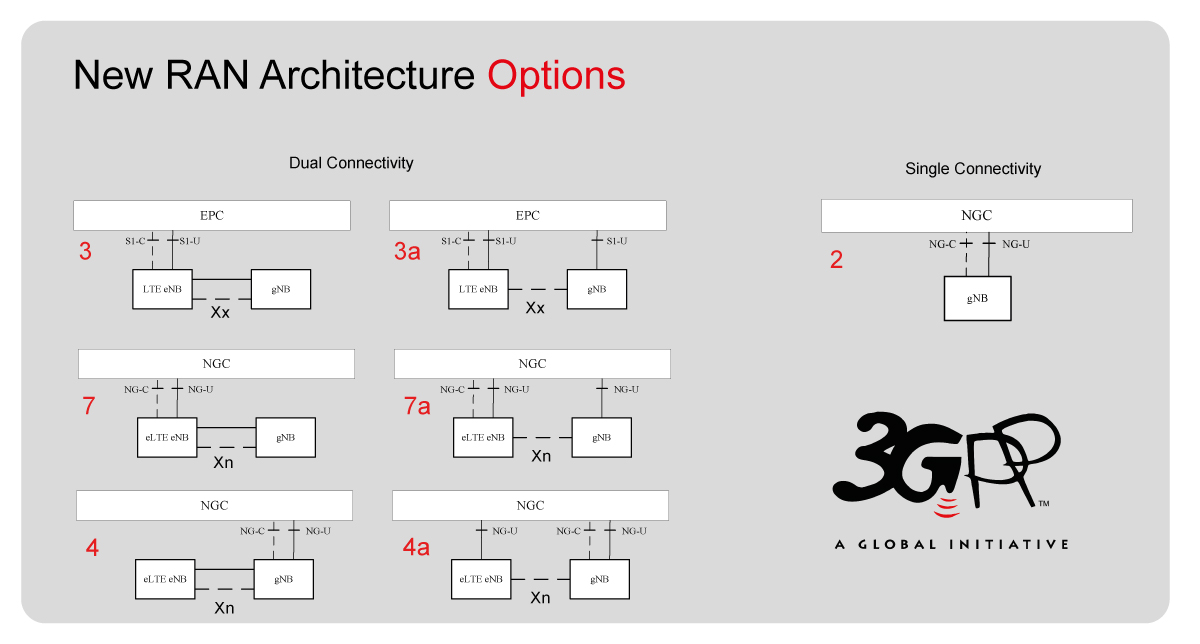 These first 5G networks will represent an evolution of existing LTE technology. What is more exciting is the development of 5G-NR, which uses a number of new (& existing) technologies to significantly improve performance, latency, scalability and flexibility of cellular networks. Part of this is the use of the millimeter wave spectrum (mmWave).

In this guide, we’ll introduce you to some of the technologies underpinning 5G-NR, some of the possible applications and the practical implications of everything we know thus far. But first, it’s important to define exactly why operators have decided to launch a brand new radio technology to cater for the fifth generation.

If 4G was intended to deliver broadband-quality performance, then 5G is tackling a much larger agenda – including improving existing mobile broadband capabilities. Qualcomm has been staunchly communicating the three major 5G deliverables, which include:

To satisfy the chronic hunger for faster mobile broadband speeds, operators are seeking to improve data throughput, reduce latency, improve coverage and increase the capacity of cellular networks. This should pave the way to rich content streaming and enhanced cloud possibilities, which are sure to excite consumers.

As well as satisfying consumer demand for faster, more responsive mobile broadband, there is the huge commercial market to consider. Industrial IoT is potentially a huge area for growth, provided the mobile infrastructure is in place to facilitate power-efficient communications.

Cellular networks have not served public safety and mission-critical communications well in the past. Low latency is necessary in smart city and autonomous driving applications, for example, and are reliant on coverage in order to function. URLLC is intended to support devices in applications with stringent reliability requirements.

In order to facilitate each of these three requirements, the air interface which sends and transmits data requires reinvention. This is where the new radio in 5G comes in.

5G-NR is the brand new air interface designed for fifth generation wireless technologies. Besides utilising a different bandwidth and operating on different (and much higher) frequencies, there are a number of infrastructural changes which should enhance performance.

The new radio is designed to improve wireless performance, quicken response times, improve the network flexibility, offer efficient scalability and reduce device power consumption. Each of these improvements requires new technologies which represent a fundamental difference to the existing 4G air interface. Here’s a brief outline of some of the major changes which have already been decided in release 15:

There are now more than 8.5 billion devices connected to a mobile network. 5G is designed to cater for a wide range of applications, so this number will be expected to rise significantly once RF solutions are widely available.

Orthogonal frequency-division multiplexing (OFDM) is a waveform modulation which introduces several separate narrowband channels. This waveform was selected due to its compatibility with multi-antenna technologies (MIMO), high efficiency and relatively low complexity for implementation.

For more information about the merits of OFDM technology over other methods of waveform modulation, review this Ericsson study on waveform and numerology for 5G.

Reliability is critical for some of the machine-to-machine and public safety applications cited for 5G. Latency and efficiency are therefore two key performance parameters for the new networks, and the 3GPP have decided to use a flexible self-contained slot structure to deliver.

The slot-based framework is entirely self-contained, which means each 5G-NR transmission is modular. Operators will also be able to to adjust latency and quality of service as needed, whilst coexisting with 4G / LTE, and add new 5G features / services in the future.

MIMO technology will be familiar to engineers who have worked in 4G and LTE projects before. The technology is called multiple input multiple output, as it uses multiple antennas situated together to increase the capacity and efficiency of a device.

For 5G, the number of antennas used will increase from perhaps 4 or 6 (which is typical of modern MIMO systems) to tens or even hundreds of antennas – particularly at base stations. This helps increase capacity, energy efficiency and reduces noise. However, the main challenge will be in the technologies that allow these antennas to cooperate and work together effectively.

For more information on the benefits and challenges of ‘massive’ MIMO technology and 5G, see this article on massive MIMO.

Millimetre waves are another innovation that has shown promise in early tests. AT&T’s early tests proved the value of mmWave at close proximity, with gigabit speeds being delivered at a 9ms latency from 150 meters away.

The mmWave uses the currently free spectrum between ~30GHz and 300GHz (typically 28GHz or 39GHz). However, there are still questions about the use of the mmWave from any distance. For the mmWave to truly take off, it’s launch would need to be supported by a whole host of small cell deployments. Although Verizon have recently launched a video to try and counter some of these suggestions of it’s poor resilience, particularly in regards to interference caused by rain and glass!

The future of 5G-NR and its use

The development of this new radio clearly indicates the movement towards a converged wireless technology for IoT, M2M and cell communications. However, convergence often creates greater complexity – especially now that the mmWave will need to be deployed at short-range.

The very definitions of technologies have only recently been decided, so we will await news of the 3GPP’s scheduled completion for phase 2 of 5G standardisation. Only after this is decided, we’ll begin to learn about the practical implications of 5G-NR. At the moment there are still some testing definitions which are yet to be decided, so we’re still very early on in the overall development and deployment of 5G.