How well can an embedded antenna perform on a tiny PCB?

This paper was written by Antenova for Embedded World 2019. This article was republished with the kind permission of the conference organisers. You can read the article below or download the full paper here for your convenience.

Are the laws of physics preventing us from designing even smaller connected devices for the Internet of Things?

NB-IoT products, are an interesting area of development right now, with many new applications in remote-controlled lighting, tracking, and wearable electronics. However, the greatest demand is for smaller products which means the devices must work with shorter ground planes, and cannot use too much power.

This presents a dilemma for the designer, because for antennas to operate at Sub-1GHz frequencies, they need ground plane lengths of 100mm or more to prevent antenna efficiency from dropping. If the antenna efficiency should drop, this will cause issues gaining network approval for the finished product. So the challenge for the product designer is to create a physical design that meets the limitations of size and space, and still performs well in operation.

This paper discusses techniques to enable PCB size reductions while enabling the antenna to perform well.

The challenges faced when selecting antennas for IoT devices today are not dissimilar to those faced by the manufacturers of smartphones when they were first introduced. The challenge is to design a product containing several antennas, some covering multiple frequencies, in a small environment, and still achieve good performance.

Most people will accept however, that the designers of many of today’s IoT devices face an even greater challenge. Over the last few years, smart phones have become bigger because it’s all about the display. IoT products are smaller. They don’t usually have screens, and they need to be small because they are body-worn, like a smart watch or a fitness band.

In addition to this, network providers are pushing everyone to move over to 4G, particularly in the US where no more 3G products can be approved. The 4G bandwidth is now essential for today’s smart phones and tablets. However, the majority of IoT devices only transmit small packets of data, sometimes not every day and they very rarely transmit any voice signals, so the 4G network is overkill for their requirement.

4G brings even greater challenges now for the antenna and the design of the PCB layout. 4G frequencies in the US are as low as 698 MHz, or even 617 MHz if you use the new T-Mobile B71 band.

Sub-Gigahertz antennas ideally require a minimum of 100mm of ground plane – I’ll explain this further when we discuss how embedded antennas function. Yet many IoT devices today are around 50 mm in length or smaller. Some are also body-worn, which adds loading to the antenna and degrades its performance. And if that was not enough, there are network approvals to pass which are more stringent in the US than in any other country – so it is essential to know the market for your final product before embarking on the design.

Fortunately, companies such as AT&T have recognised this and have subsequently dropped the efficiency threshold level for devices smaller than 107mm in length.

To understand your design challenge, you need to know how an embedded antenna works.

Unlike a digital component, an antenna will not perform as per the specification quoted on the data sheet. There are several factors that can affect its overall performance, such as:

The greatest of these challenges is ground plane length for sub-Gigahertz frequencies. 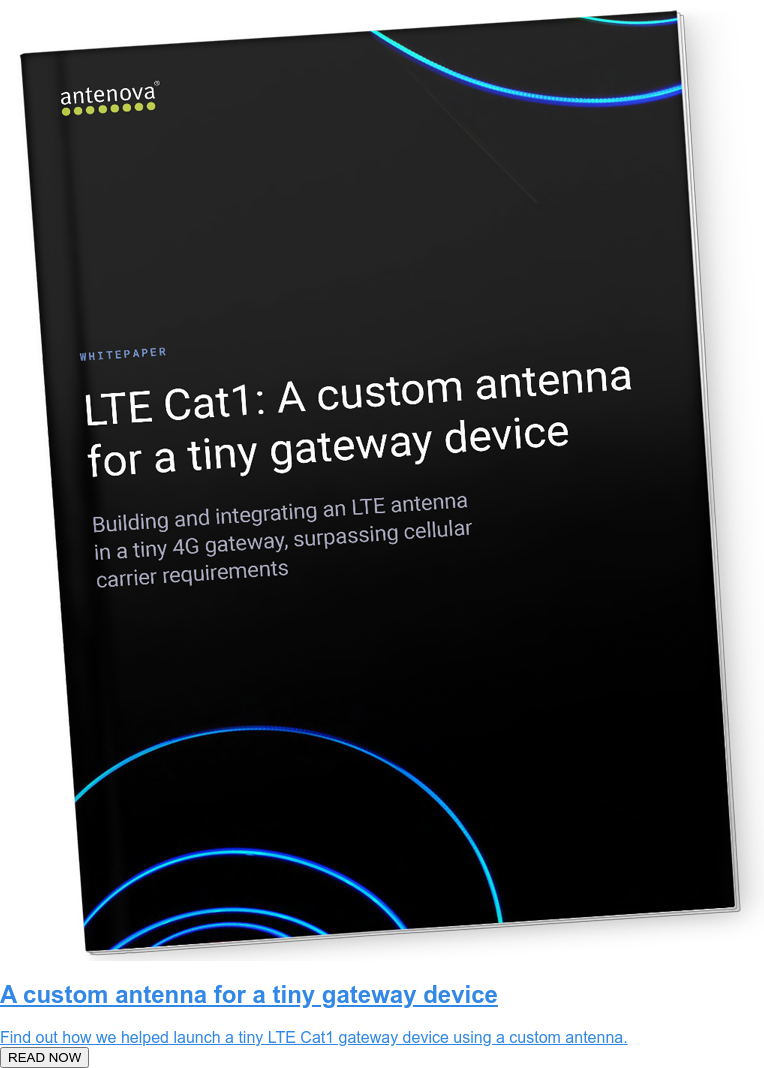 A dipole antenna is an antenna with two radiators:

The length of each radiator is related to the wavelength of the frequency that must be received or transmitted. Embedded chip antennas have only one radiator. So, for the antenna to function, the ground plane of the host PCB becomes the second radiator. Therefore, your PCB ground plane length is important. If it is too short the antenna will lose efficiency.

The effect of a shorter ground plane 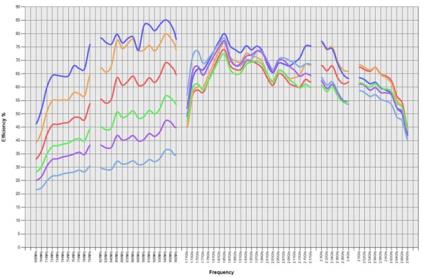 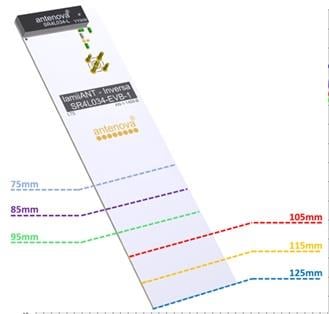 With an embedded antenna, resonance occurs at whole number multiples, or fractions of the wavelength, although a half-wave is the shortest resonant length of an antenna. However, you can get around this limitation, since a quarter-wave monopole antenna can radiate against a ground plane, which then acts as the missing half of a half-wave dipole. Quarter-wave monopoles are by far the most popular antennas used in portable wireless devices.

A full-wave 916MHz antenna is approx. 327mm long. This is clearly not achievable as an embedded antenna in a small device. A quarter-wave version would now be down to 87.2mm. Coiled up across multiple layers in a small surface mount chip antenna is how this is achieved. The other radiator, your host PCB ground plane, must be a single length of this size or greater for lower frequencies. It is important that the ground plane should be at least one quarter wavelength of the performance of the antenna lowest frequency, or its efficiency will be seriously compromised.

It’s not just the ground plane length that is important in the design. You should give careful attention to the details of the overall RF layout if antenna efficiency is to be maximised.

It is important that the copper ground plane is not too complex – not cut up with traces or divided between layers. For multi-band frequencies we recommend a minimum four-layer PCB structure as shown in Diagram 2.

In this structure you have a top and bottom ground plane layer. Both grounds should be tightly knitted together to prevent a floating ground. All digital signals and power lines should be run in between them. 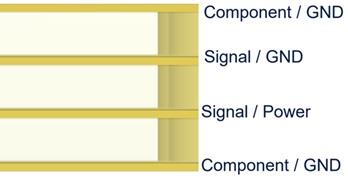 This kind of configuration will allow for the whole of the ground plane portion of the antenna to radiate effectively, as shown by the hot spots on the simulation in Diagram 3.

As well as the ground plane length, attention should also be given to the following:

Depending on your design and product architecture, there are other possible solutions to improve performance, such as:

Your ground plane does not have to be your host PCB. A copper extension can be added. However, care must be taken not to loop this piece of copper around and underneath the existing ground. An example of this is a watch application. In this case, the ground extension can be run into the watch strap.

The 4G frequency range is from 698MHz (excluding band B71) to 2690MHz. This is a very wide frequency range to match and tune your antenna to work over. So, if your product is to be used regionally, why not fine-tune the antenna, by matching it for just the bands used in the country of operation?

Where a host PCB less than 75mm is required to support 4G, the recommendation is to implement an active tuning network (depending on the construction of the antenna). A little like the example above, you can now have a simple RF switching circuit to select between matching component values as shown below in Diagram 4. Although the antenna is multi-band, it will only transmit or receive on one frequency at a time. The switch can tune the antenna for low, mid or high band support. 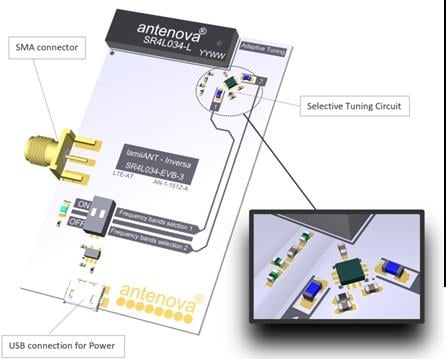 Once again, depending on your product design or architecture, why not select an alternative antenna designed for a different mounting position, but still embedded.

FPC antennas can be fixed to the underside of your product housing with a cable and a connector carefully routed down to your PCB as shown in Diagram 5. Although these antennas can be slightly more expensive due to the cable and connector, they can offer better performance in some applications because the antenna is now away from the main host PCB which can be subject to noise and interference. However the positioning of the FPC antenna and the cable routing are still very important.

Another solution might be the use of a blade antenna which is mounted at 90 degrees to the host PCB(s) and connected by pogo pins. A good use of such an antenna is shown in Diagram 6, which shows an OBDII device.

Embedded antenna design is never easy, particularly if the environment is challenging and there is the need to support sub-Gigahertz frequencies. But it’s not impossible if you recognise the fact and go about your design cautiously.

In all designs, it is extremely important to consider the antenna placement and layout first, before moving on to the rest of the design. Why? An antenna only works effectively in a few places on a PCB. Its position and layout are critical to its effective operation. In this way antennas are unlike most other digital devices.

Our advice is to follow the data sheet guide lines and the advice from your antenna supplier carefully. Ignore these, and many months of design effort and expense can be lost when your product fails network approval. 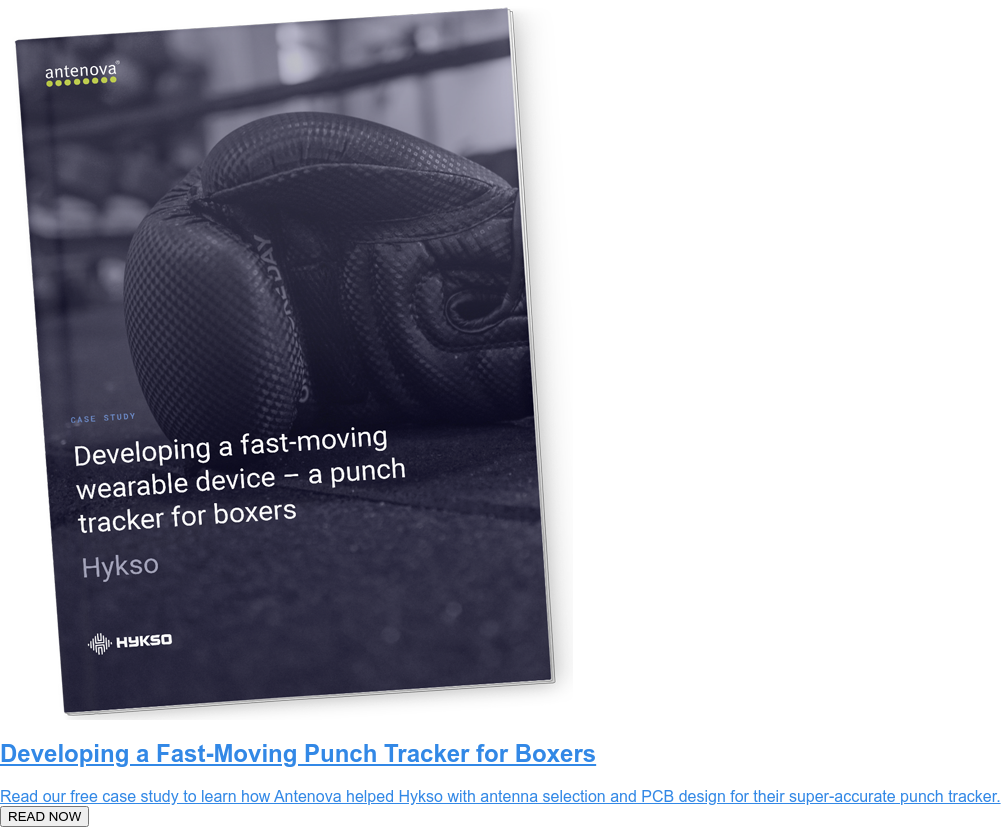 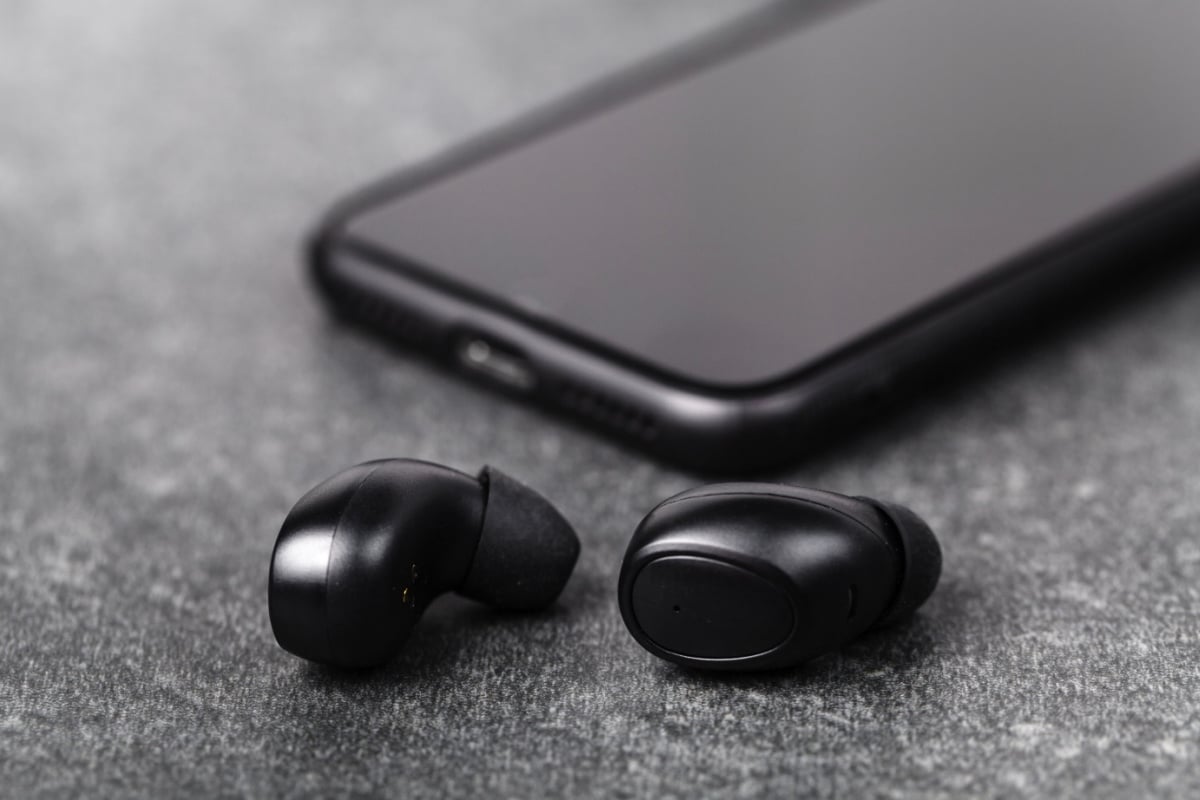