How IoT trends are influencing antennas and wireless technologies

Consumer and business technologies are changing rapidly. Recent advances in artificial intelligence, robotics, sensor technologies and security are all strongly influencing wireless and RF tech. As a result, hardware, software and network infrastructures are changing to accommodate the major sea of change in technology.

Here are four trends that are influencing the makeup of wireless technology:

Electronic technology is beginning to embrace technologies that give devices ‘intelligence’; the ability to act and think by themselves, based on their own knowledge. It’s a new advancement, machinery has historically been manually operated or automated – using predefined rules.

Machines with intelligence are becoming crucial. But like humans, they need a process to learn. By using training data or shared knowledge, we can accelerate the speed machines get up to speed.

Now, thanks to advances in computing power and better knowledge of machine learning models, the opportunities for new applications are opening. From devices that are able to process natural language, to systems that can optimise business efficiency. Wireless technologies enable machines to communicate with one another, which in turn gives them the feedback and data they need to make decisions. This could be as simple as recommending an optimum route for a robot transporting goods, or as sophisticated as determining where to allocate resources in a production plant.

To push artificial intelligence forward, there’s a real need to connect new forms of devices. Thanks to wireless technologies powered by LPWAN, like NB-IoT, devices located ‘deep’ indoors or underground can now be connected to communicate data in real time.

Data has become an incredibly valuable commodity. So much so, European and American regulators are increasingly governing the use of data, through the California Privacy Act and the General Data Protection Regulation.

Collecting data in industrial and consumer contexts is important. Take autonomous cars, for example. To effectively train machines to drive cars, auto manufacturers such as Tesla are collecting data from millions of miles of driving. Interpreting this data is vital – it’s where machines effectively learn the rules of the road and how to respond to different scenarios. Without data, the models cannot be generated and therefore cannot guarantee safety.

Accurate and reliable sensors are crucial in our example. Without effective sensors, questions may be raised over the accuracy of data. Great wireless antennas can allow sensors to operate unimpaired, and collect worthwhile data.

Sensors of all kinds are now requiring the kinds of connectivity previously only seen in smartphones.

Society is on the cusp of a robotic revolution. According to plenty of think-tanks and business leaders, robotic process automation could change the way the economy works – in both goods and services sectors. In manufacturing settings, increasingly powerful robotics are capable of transforming production lines.

Robotics also gains value through connectivity. Coupled with sensors and artificial intelligence, robots can be deployed at scale, while working together to achieve a common goal. This, of course, requires wireless capabilities – the exact needs of which will vary based on the application.

Robots may be favoured over humans in areas that are hard for humans to access, where tasks can be automated seamlessly, and where there’s little creativity required. This leaves the workforce free to monitor these machines and use their creativity to deploy machines in new ways.

With an influx of connected devices entering the market, security and privacy have become two of the most pertinent issues in the IoT. This, fortunately, is being reflected in the makeup of wireless networks and ingrained within wireless technology.

Encryption is now a standard feature of wireless technologies using licensed frequency bands. The value and sensitivity of data is therefore making it all the more crucial to address security concerns with IoT products.

The surface area prone to attack is increasing as more devices, carrying sensitive data, connect through wireless technologies. A larger surface area means that more threats are available to breach.

At Antenova, we’re committed to making the wireless design process as seamless as possible. As devices become more compact and powerful, the world needs advanced antennas solutions that enable technology to advance.

Wireless technologies are having to adapt to meet the new demands placed on the IoT. Technologies such as NB-IoT are enabling new types of devices to connect, while 5G is increasing data transfer rates that are also enabling new applications. Ultimately, these new technologies may only make an impact through RF antennas.

New types of antennas are key. Where wireless performance matters – so does the integration of a high performance antenna. Without an antenna that’s optimally designed in, you need to consider the integration requirements necessary to safeguard performance. These may be in the form of ground plane space, via placement, antenna placement and the placement of other components. 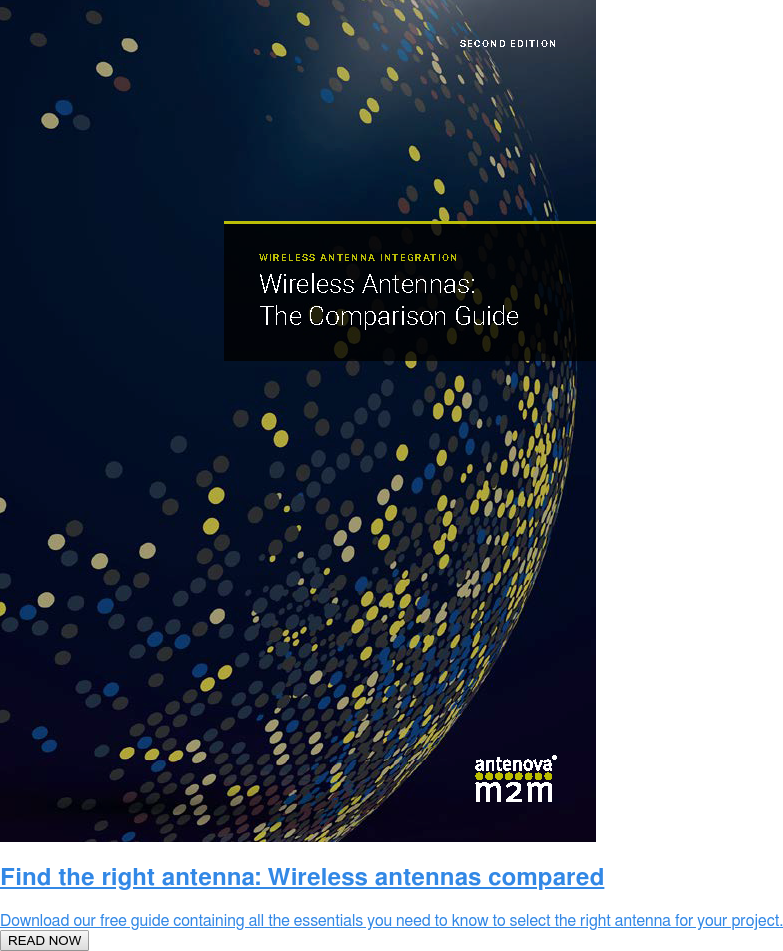