The Hidden Costs of Trace Antennas

When tasked with a wireless device design, some engineers may consider a trace antenna first. Trace antennas can provide cost advantages over chip antenna and can be fully designed and integrated by yourself. However, both the cost and control advantages can be superficial.

Due to their ease of manufacture, there is a range of associated (yet hidden) costs, that come with their usage. Some issues arise at the latter stages of development, whereas some are completely undetectable until after the device has been manufactured. For this reason integrating a trace antenna successfully can be a challenge, particularly so in small, compact devices.

It is important to note the risks associated with trace antenna integration. Notoriously, they are difficult for performance, especially when multiple frequency bands are required. Given that wireless performance is now a key parameter of any SMART devices function, it’s vital you consider the implications of selecting a trace antenna over a chip.

In this article, we’ll take a look at 4 of the most prevalent issues encountered when using trace antenna, to help you select the optimal solution best suited for your next design.

Trace antennas are particularly vulnerable to detuning effects. In many typical products, host PCBs will use plain, low-cost RF4 materials, however, these materials have high levels of loss and are not able to be tightly controlled in respect of their ER. From lot to lot, the dielectric constant will also change over frequency. This is far from ideal – this can heavily impact final performance and repeatability in manufacture.

Then when you consider the presence of components and human operators – both likely to detune any antenna to some degree – the shifted frequency can cause degraded performance, or even render the device unable to function.

This limits the performance potential of trace antennas for many designs. For example, wearable and handheld devices are highly susceptible to degraded performance, especially if using a trace antenna.

Antennas are renowned for the design inflexibility, which makes them unique to any other type of electronic component. Antennas performance is determined almost wholly by the operating environment, this creates a number of considerations you need to factor in when you are integrating a wireless antenna. However, the flexibility you do have to integrate with them is reduced further with a trace antenna.

Firstly, as they are 2D in structure, the real estate they take up can be anything up to 10x that of a chip antenna. If you attempted to reduce the footprint of a trace antenna, you will reduce performance in some regard. By comparison, chip antennas are able to provide superior performance within a small footprint.

Additionally, minor changes between your planned design, prototypes and the first lot of manufactured designs can influence performance. Technical catastrophes are not uncommon when using a trace antenna, as they are highly sensitive to even minor material changes, even the ones outside of your control.

One common issue is when the host PCB composition varies between design, prototype and final manufacture. The tolerances on standard FR4 laminates can vary considerably from lot to lot and this can have devastating effects on performance. Trace antennas are particularly susceptible to these deviations between design and reality.

Once manufactured, trace antennas are virtually impossible to ‘fix’ or tweak, as it is laminated onto the PCB and cannot easily be removed. Dysfunctional boards featuring a trace antenna will need to be scrapped, as the tuning of such an antenna is less easily manipulated, due to the composition of your circuit board material tolerances.

All of these factors cause real integration issues for engineers, causing missed deadlines, wastage and even hefty financial losses from oversights.

Whilst trace antennas are undeniably economical to manufacture, they cannot guarantee high levels of performance in unstable operating environments.

If distance and/or quality of your RF signal is important, then a trace antenna is not the ideal choice.

Trace antennas are more prone to noise than their chip counterparts, due to them being integrated as part of the host PCB.

Interference is one of the most prominent causes of integration issues, causing many devices to fail to work at the first attempt at design. Where the noise factor within a device is high, a chip antenna may provide superior performance. This is due to the 3D structure of an antenna chip.

One advantage of this structure is that the noise effects of nearby components are notably reduced. The antenna chip to be flexibly tuned to meet the requirements of the device.

If you do select a trace antenna, then it becomes essential to extensively review every design change. This is necessary to ensure the device works effectively. What may initially appear as a low-cost solution could end up costing much more, or even worse, result in a product that fails to work.

For more flexibility, enhanced performance and to suit small devices, chip antennas should definitely be considered. To learn more about what to look for in an antenna, take a look at the Antenova product range or take a moment to download our eBook on Wireless Antennas: Compared. 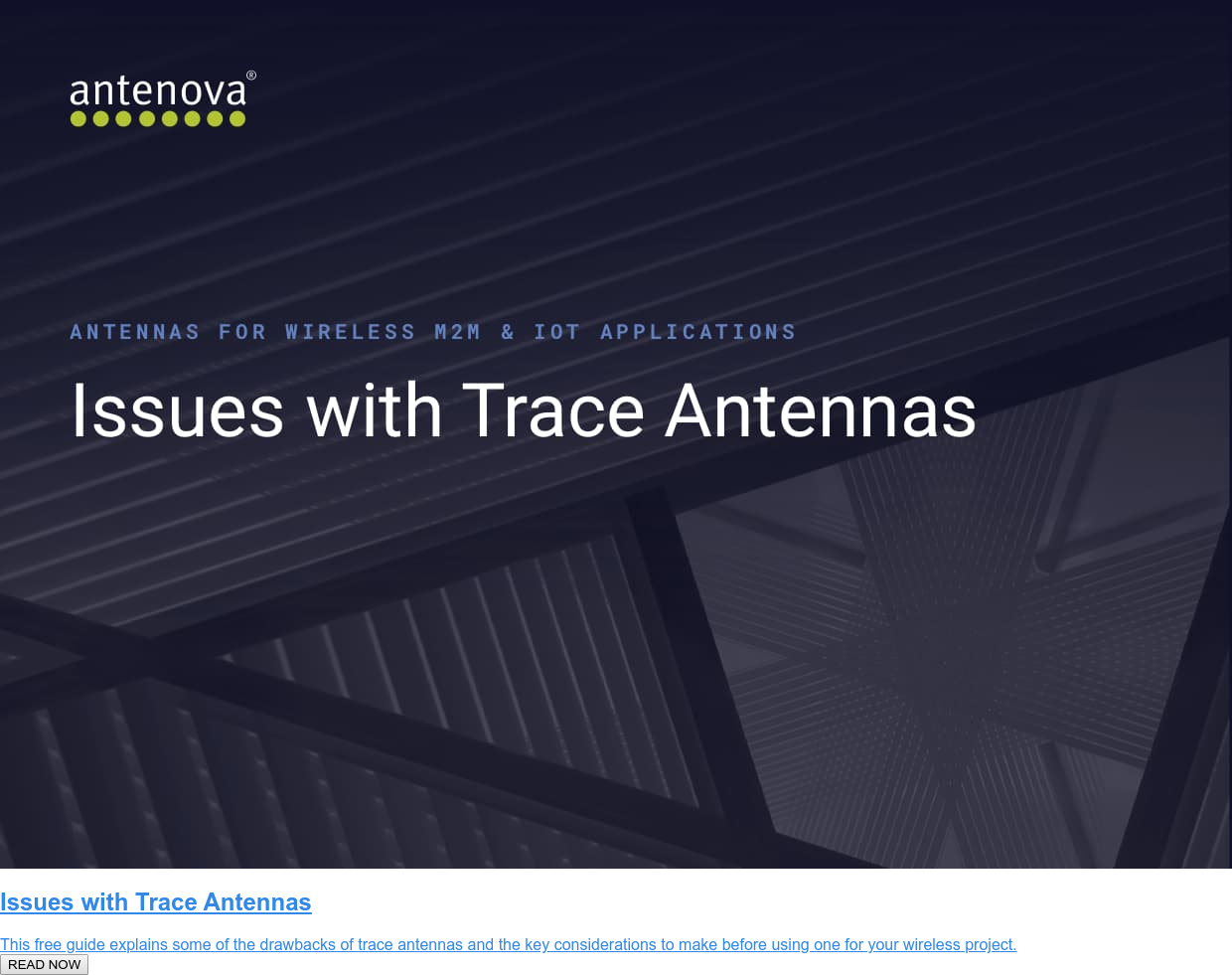